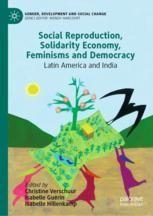 his book contributes to timely debates on the conditions of resistance and changes with the aim to offer a ray of hope in times of ecological, economic, social and democracy crisis worldwide. In the context of the crisis of social reproduction, impoverishment and growing inequalities, myriads of women-led grass-root initiatives are bubbling up. They reorganize social reproduction; redefine the meaning of work and value; explore new ways of doing economics and politics; construct solidarity-driven social relationships and combat their subordination. In doing so, these initiatives challenge the patriarchal, financialized and dehumanizing capitalist system and offer transformative, sustainable paths for feminist social change. Drawing on fine-grained ethnographies in Latin America and India, this book sheds light on women’s daily struggles, their difficulties, contradictions, fragilities, and also their successes and achievements. This book seeks to inspire activists, researchers and policy-makers in the field of feminism and solidarity economy to contribute to amplifying the movement, which rests on the articulation of the various initiatives.

Afterword: The Cross-Fertilization Between Feminism and the Solidarity Economy, Laville, Jean-Louis